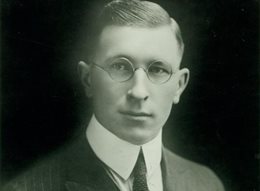 November 14 is World Diabetes Day: a global event and official United Nation’s World Health Day that unites the global diabetes community. The date was chosen in honour of the birthday of Canadian Sir Frederick Banting, who together with Dr. Charles Best, discovered insulin.

World Diabetes Day is commemorated with a blue circle, a symbol of positivity, life and health. To show your support of World Diabetes Day, light your house with blue lights, share your personal stories on social media, wear blue, and add your voice to the thousands of others who will be uniting for the day.

Read on to discover five surprising facts about one of Canada’s most beloved historical icons, Sir Frederick Banting.

1) Banting was a war hero.
Well before Banting saved lives with insulin, he was saving his countrymen in the First World War. Though Banting reported for duty to the Canadian Army Medical Service in 1916, it was his acts of heroism on September 28, 1918 when Banting truly made history. On that fateful day just outside Haynecourt, France, Banting—under intense enemy fire and seriously wounded—proceeded to attend to his battalion for nearly 17 hours. Suffering from a severed interosseous artery in his right arm, Captain Banting refused to be sent to the rear, a decision which resulted in him being among the few Canadians awarded the Military Cross for “distinguished and meritorious services in time of war.”

2) Banting was an acclaimed artist.
In 1923, Banting was just 31 years old when he was awarded the Nobel Prize in Physiology or Medicine. Considered one the world’s most influential medical experts, Banting sought refuge from his newfound professional pressures through his pursuit of painting. Banting eventually formed a close bond with Group of Seven painter A.Y. Jackson, and the two travelled much of Canada together, painting the Canadian Rockies and Northern landscape among other iconic Canadian locales. Banting’s fame, and the quality of his work, would lead to him being regarded as one of Canada’s more noteworthy amateur artists, and to this day his works are quite collectable in many art circles.

3) Banting’s home draws thousands of tourists every year.
Originally purchased by the Diabetes Canada in 1981, Banting House National Historic Site of Canada has grown to become one of London, Ontario’s most important national and international tourist attractions. The house—where a young Banting started his fledgling medical practice in 1920—has since been converted into a full-featured National Historic Site of Canada, and offers an expansive gallery of Banting artwork, an array of historical artifacts, and a fully restored bedroom that captures the exact moment in time when Banting first conceived the idea for insulin. Visitors from across the world leave letters thanking Banting for his life-changing discovery, and his bedroom has since been turned into a veritable shrine.

4) Banting was a comic book hero.
Ask just about anybody who has been touched by diabetes and they’ll probably tell you Banting is a hero. What you may not know is that Banting was an actual comic book hero as well. In December 1941, the Comic Book Corporation of America published its second issue of World-Famous Heroes Magazine, a comic book dedicated to telling the true stories behind noteworthy historical figures. Banting appeared on the cover, alongside baseball-great Lou Gehrig, American President Andrew Jackson and American military-legend General “Billy” Mitchell. Billed as “Canada’s renowned scientist,” Banting’s chapter in this pulpy publication tells his complete life’s story, from First World War hero, to the discovery of insulin, right up to his untimely death in 1941.

5) Banting died serving his country.
By the time the Second World War broke out, Banting was long-known as the discoverer of insulin, but his life-saving research wasn’t finished yet. In 1938, Banting began working for the National Research Council to fix what he viewed as a potentially critical gap in Allied scientific knowledge: aviation medicine. Specifically, Banting’s work helped contribute to the invention of the G-suit, a special outfit worn by pilots which prevents blood from pooling in the lower part of their body, causing them to black out. In 1941, Banting—who was no stranger to risking life and limb for country—made the decision to fly to Great Britain to ensure the safe transfer of secret research considered invaluable to Allied war efforts. Shortly after departing from Gander, Newfoundland, both engines of Banting’s plane failed, and the aircraft crashed on Newfoundland’s remote Seven Mile Pond. Despite initially surviving the crash, Banting was mortally wounded, and on February 21, 1941 he died along with two of the plane’s crew members. Search planes would eventually find the doomed flight’s lone survivor, the plane’s captain.